Is the channel suffering from a case of discount fatigue? If so, is there another way to go before we hit the bottom? Jess Brunette reports. 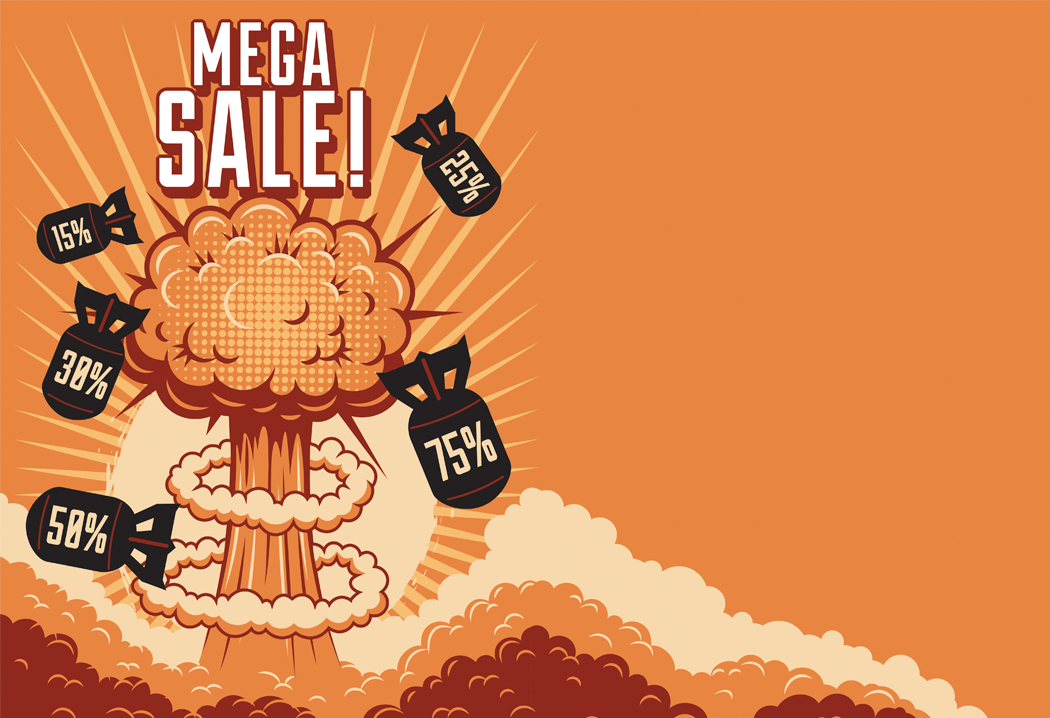 The phrase “race to the bottom” is one that many players in New Zealand’s consumer electronics and appliance channel will be well familiar with.

In writing features for Wares over the last few years I have heard many a player complain about the continuing erosion of margins as retailers increasingly feel obligated to compete with each other on price.

One school of thought is that this disenchantment with the state of retail pricing is now also being been felt by consumers.

In the UK and Australian markets the term “discount fatigue” has recently been bandied around by the media.

The phrase refers to a state where consumers, hit by sale after sale, are no longer excited by the prospect of massive discounts and take these reduced price points as givens rather than special events to hurry them into the stores.

The trouble is, this term has been used recently in connection with business failures like BHS in the UK.

Discount fatigue: has it arrived here in NZ?

To get a local perspective on this phenomenon, I ask Briscoe Group CEO, Rod Duke, if he feels Kiwi consumers are suffering from their own strain of discount fatigue.

While there may be some that are weary of discounting, Rod Duke is confident that there are plenty more for whom the thrill remains.

I ask the Briscoes boss if he feels there is a particular Kiwi consumer type that might be turned off by ongoing pricing strategies that favour discounting?

“I honestly don’t know that there’s a particular demographic in New Zealand that hates saving money or loves spending too much money,” he says.

“I think New Zealanders, like most folks, like a deal. They like to buy at the right price if that’s possible. And I think that goes across all categories.”

As the head of what is undeniably one of New Zealand’s most successful retailers, Duke’s words do carry a lot of weight, with the chain’s recent financial results backing
this up.

But do all the large retail groups share his optimism?

Better to be fair and reasonable?

Noel Leeming CEO, Tim Edwards, feels that New Zealand “absolutely” has its own strain of discount fatigue, thanks to what he feels is a historically heavy discounting culture.

Indeed, he feels that some of the “largest discount rates in the world” have been rampant in our retail sector for the last three decades with products being sold nowhere near the recommended retail price.

“The problem [with discounting] is that it’s a bit like a drug. It starts out at $5 off then $15 then $20 and where do you finish? Then it becomes almost the norm that the consumer expects not to pay full ticket price… We’ve built a bit of a rod for our own backs unfortunately,” says Tim Edwards.

On the other hand, the Noel Leeming CEO is quick to admit that the national chain plays its part in the discount game.

In fact, it’s important to note that all the players I spoke to for this feature concede that, in the current retail climate, you simply have to either discount or at least price match, to remain competitive.

What Tim Edwards and many others also agree on is that it’s dangerous for retailers to use just price in their value proposition.

There are some however who suggest that New Zealand consumers as a people are, by their nature, more price-focused than other nations but Smiths City CEO, Roy Campbell, feels this is too long a bow to draw.

“Certainly price and discount works but it’s only one part of your strategy when facing the consumer,” Campbell says.

“I think the real challenge that any consumer faces is identifying those organisations where they derive true value to their purchases.

“So, in my opinion, if you can present the consumer with a compelling value proposition that is fair and reasonable, that will be attractive to them.”

What do the indies think?

So much for the national chains. A different point of view is offered by the owner-operators of independent retailers around the country.

In the City of Sales, I ask 2016 Wares Awards Young Achiever, Winston Lim, of 1OO% Lim Electronics & Appliances, if he feels New Zealanders are tiring of repeated discounts.

“Of course they are! 100%! [no pun intended] Every weekend is a sale with 20-25% off. And some consumers still believe in it for some reason, which is crazy.

“All it really does is train the customer to wait for a sale when they could probably get it at everyday low pricing if they wanted,” he says.

And what of the argument that Kiwi consumers, rather than retailers, are price focused? Is a discount mentality in retail stores just giving the people what they want?

Jenny Amies, co-owner of Waiheke Living, feels that this is too simple an approach, preferring to break consumers down into three main types of customers.

“The first one is completely price-driven.

“The second doesn’t mind a good price providing there is a bit of service for that.

“And the third one knows who they are dealing with and doesn’t worry about the price because they trust their store,” she says.

Jenny Amies goes on to say that while some customers simply cannot be dealt with on any level other than price, others can be brought round to a more value focused mentality after a few good in-store experiences. 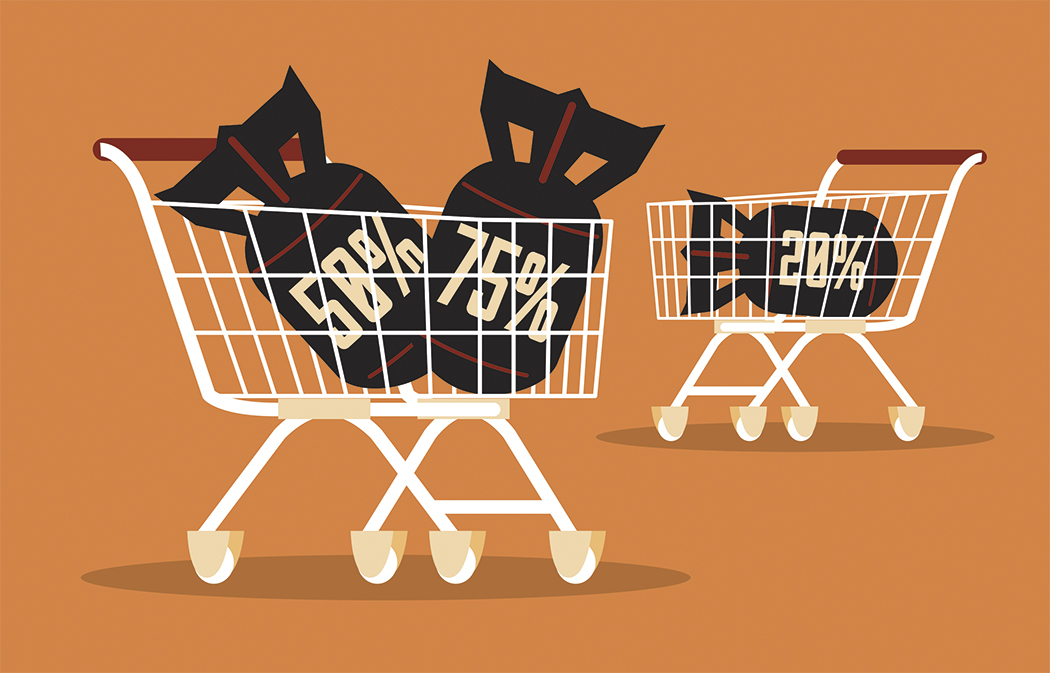 Price matching – not a dark place to go?

Of course, before a well-meaning retailer can offer its customers great value and in-store experiences, they need to get them in the door.

Is there a way to drum up enthusiasm without offering store-wide discounts that put the onus on price and destroy margins into the bargain?

On to Gisborne and Paul Fenn of Fenns Furniture & Appliances, who admits to price matching – like most in the industry – but who also tries not to focus on discounts in the store’s promotions, preferring to push a “range of quality products at a good price”.

“I think the industry generally makes about the same sort of percentage margins but we just try and make our dollar sale a bit better, selling better gear. And I think that’s where an improvement could be made – rather than trying to sell all the cheap stuff, try to sell something a bit better.”

Ian Walker of 1OO% Folders Kaitaia also price matches but takes a similar approach to Paul Fenn, with a carefully curated range of products on the shop floor that suits his customer base with a good-better-best offering that also optimises store-wide margin.

1OO% Folders also tries to stay away from products and models that have already been hammered by discounts in the market, only getting them in if specifically requested by a customer.

Most importantly, Ian Walker never uses price to attract customers to his store, an approach exemplified by a recent laundry expo in the Kaitaia store.

“There was no price in the advertising at all and we sold 40 machines in a week! And while I competed and matched because we have Noel Leeming across the road and Farmers in town, I never discounted once and I did very well out of it,” he says.

Unlike Ian Walker, although Guy Whittaker’s recently rebranded Applianceplus stores in Te Kuiti and Otorohanga have no direct opposition in town, they still have to compete with retailers in the larger centres, with service and convenience his main draw cards to take on the larger players.

“Some customers do jump in their car and go further away. But a lot of time they haven’t really done the economics of what it’s costing them to actually drive out of town.

“So we tend to focus more on a service level and hope that our loyal customers will actually come back and give us the chance to match,” he says.

And while Guy Whittaker tries to remain flexible with his customers, he does have his limits.

“In a small town they are used to getting a certain level of service, but if customers want us to match city prices we can’t afford to be doing free deliveries and that kind of thing as well.”

If you just can’t beat them, join them, in other words.

Where to from here?

With discounting – or at least price matching which may at times appear to be the same thing – a necessary evil in the current market is there a smarter way to do it than blanket promotions?

Big data may be offering some light at the end of the tunnel for retailers to create smarter more targeted promotions and discounts for better returns with concepts like personalised pricing (see sidebar) touted by forward-thinking retailers as key components of a successful pricing strategy in the coming years.

“Over the next couple of years, in particular, we’ll see a lot more science in discounting,” says Noel Leeming’s Tim Edwards who already has a toe in these waters with the My Noel Leeming loyalty scheme that already boasts over half a million Kiwis signed up.

Says Tim Edwards: “We asked them to tell us a little bit about themselves. That helps us to tailor the information we give them.

“And it’s definitely not about discounting. It’s about adding value and that’s been very successful for us. Is it perfect? No. Will it continue to evolve? Absolutely,” he explains.

“I’m a great advocate in recognising the value of every customer to Smiths city and ensuring they are recognised for their repeated purchases. And we do that now with our data mail outs and offers to the over 700,000 people in our finance program. So Big Data is definitely here and it’s an area that we’re increasingly going to,” Campbell says.

So what is it that you have to offer? 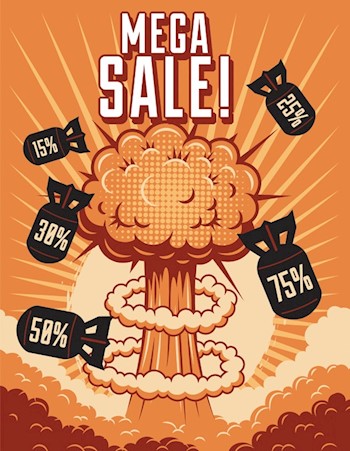 Brian Kilcourse at RSR Research shared some thoughts on personalised pricing (PP) and what separates the retail winners from the underachievers in the States. Here are a few key takeaways:

What is Personalised Pricing? – Touted as a potential antidote for the “spiral of discounts” seen in the US since the GFC, PP involves retailers offering different prices to individual customers based on data collected from each customer.

Examples of this data include browsing history, purchase history, demographic and postal codes. For example, online customers identified as coming from a more affluent postal code could be offered a higher price than others.

Is PP really here yet? – Not really. Brian Kilcourse found very few examples of retailers currently using PP in any significant manner. However, he noted that the most successful retailers were all looking into PP for the future and predicting that it will be far more commonplace in around three years’ time.

What’s the hold up? – At present, the method of delivery of PP is unclear to retailers. “The prevailing thought at the moment is that PP will be associated with loyalty programs of some kind. You might almost think of them as personalised discounts as opposed to personalised pricing.”

There is also concern that consumers may resent that some people are being offered better prices and that execution at store level, particularly in large chains could be difficult to implement.

What are average and underperformers doing now? – “These retailers tend to define their value proposition as a low price. The problem with that, of course, is that on any given day any retailer can decide to take you out on price, they just have to be willing to take the hit. So, if your strategy is a low price strategy, that just means you don’t have a strategy.”