ROLLING BACK THE YEARS TO JUNE 1998

The industry 20 years ago, as seen through the eyes of Wares magazine. 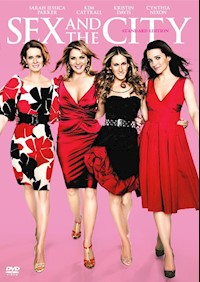 Twenty years ago this month, Matt Dawson’s dreadful England rugby team played five matches here and lost them all. The ABs won the tests 64-22 and 40-10.

Windows 98 was released that month and TV sitcom, Sex and the City, premiered in the US on HBO. 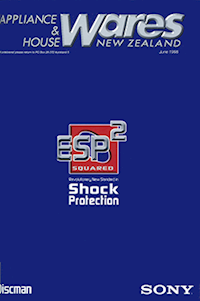 Ch-ch-ch-changes – The June 1998 editorial had it that “The times they are a-changing” and looked at the changing relationships in our industry.

It talked about the divestment of Fisher & Paykel’s distribution businesses, the morphing of the Fapay group into Appliance Connexion (aka ACL) and the emergence of the 100% Your Electric Store chain of independents.

Retravision as you may recall, was liquidated in 2009 and most of its members joined the ACL camp.

Kenwood’s customer cars – Radiola Corporation was a most progressive outfit which can take the credit for repositioning Samsung into a truly competitive brand in our market ahead of the arrival of the parent company itself.

Radiola also took Kenwood to a position of strength and in 1998 used the brand’s 50th birthday to good promotional effect, putting up two Porsches as promo prizes, both decked out with Kenwood car audio (photo above).

One classic Porsche went to a lucky customer who’d bought a Kenwood system and the other to the retail store that made the sale.

Radiola’s National Sales Manager, Charlie Unwin (“Where are they now?” October 2017), was on hand to present the consumer prize to Neil Kelsey of Ranui in West Auckland, as was Russell Taylor of Hill & Stewart Lynmall who sold the winning stereo.

The shop’s prize was sold with the proceeds shared by Hill & Stewart staff.

Charlie’s now contracting to Santa Fe Shutters, selling and installing in a market which he feels is at the tip of a sales explosion.

Does anyone know where Russell is?

Jeepers creepers – Southcorp also had an upper end motor vehicle as a promotional prize with its "Two American Legends" competition for all purchasers of a Maytag product.

The Jeep was won by Judy Talley, who purchased the winning Maytag from Reliance Retravision of Motueka and was presented with the keys by Southcorp National Sales Manager, Bevan Baker (photo above).

Bevan’s still in our game, at Eurotech Design. 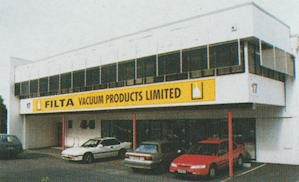 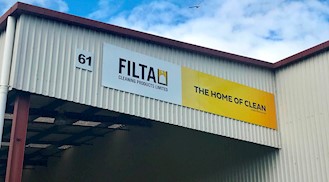 Bags of money in bags – Since way back in 1977 the successful Filta Cleaning Products enterprise has been selling generic bags and accessories for a variety of vacuum cleaner brands, much to the consternation of machine suppliers.

In our June 1998 issue, Wares reported that Andrew Black, Filta’s GM of seven years, had just bought the Filta activity and was moving to new premises at 17 Kalmia Street, Ellerslie (above left).

Sadly Andrew died suddenly a couple of years back and the company is now owned by the Name & Natural Trust, essentially the Black family trust.

Today, Lee James is Filta Cleaning Products’ General Manager and the company relocated from Ellerslie to new, bigger premises at 61 The Concourse in Henderson (above right) back in March. 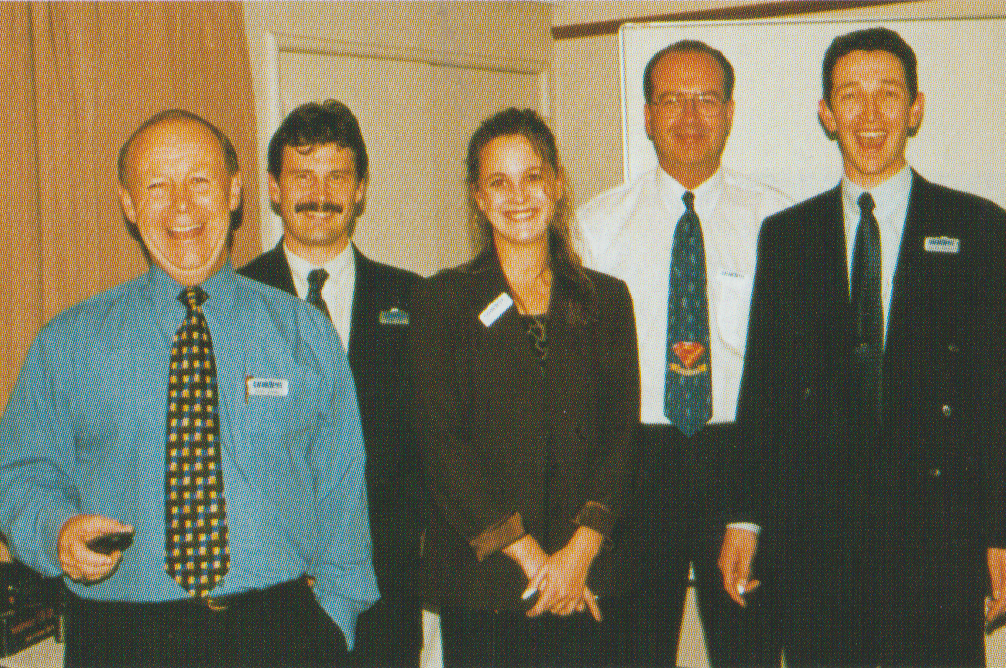 Uniden’s road trip – Under the leadership of GM, David Norrie, 20 years ago this month, Uniden had just completed a very successful road trip, making presentations at no less than 12 locations across the country.

Uniden’s 1998 product guide – the “Uniden Bible” – was also released to the trade at each session.

“If someone has a question concerning a Uniden product,” he said, “95% of the answers can be found in the guide.” 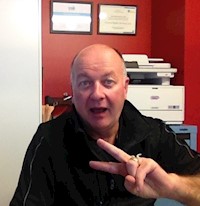 Karina is married to Monaco Corporation Director/General Manager Carl Paulson and is a full time mum to their two children, Brett is Business Development Manager at Queenstown Radio Services and Callum is Sell-out Sales Manager at Bosch Home Appliances. 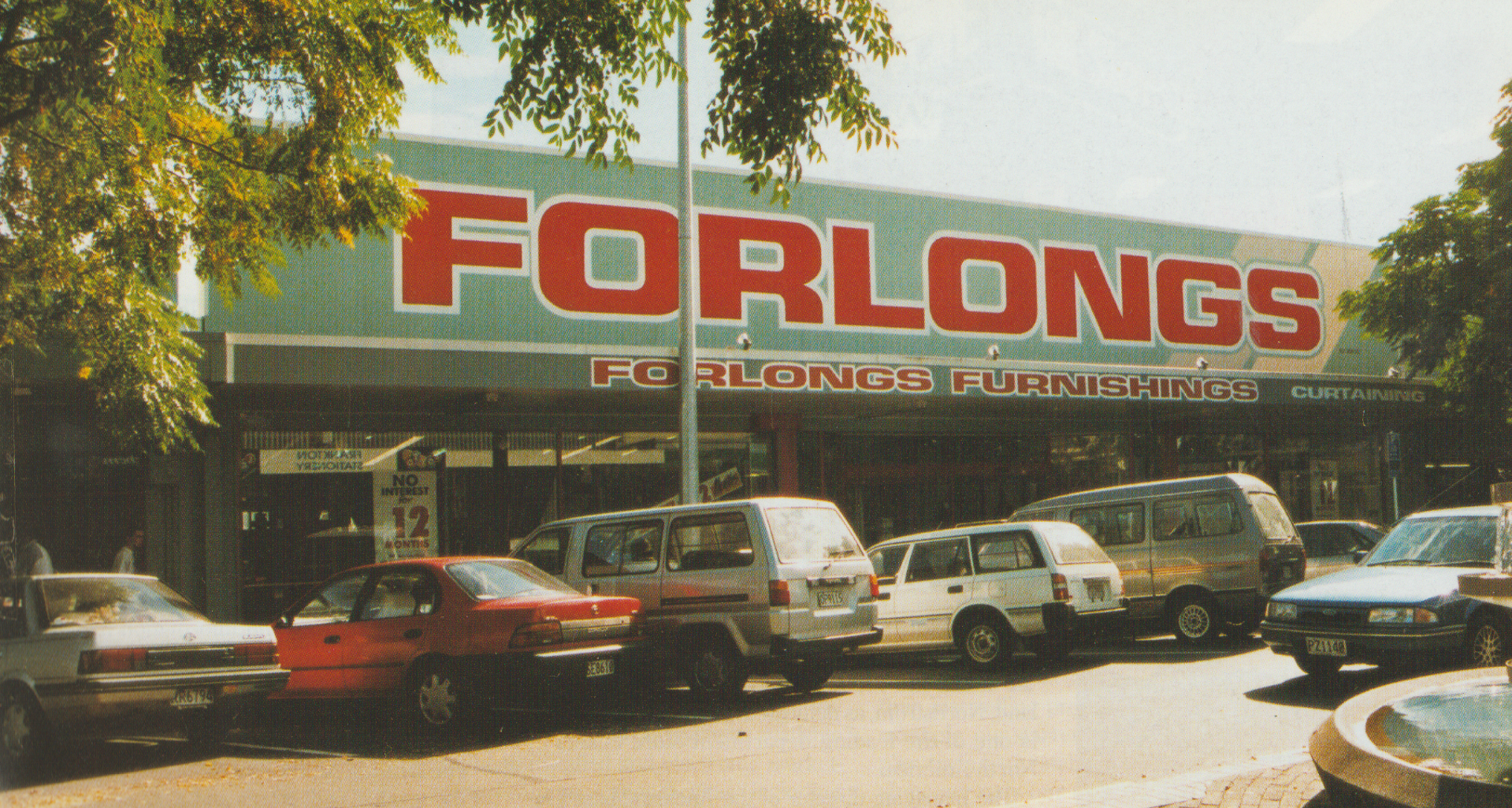 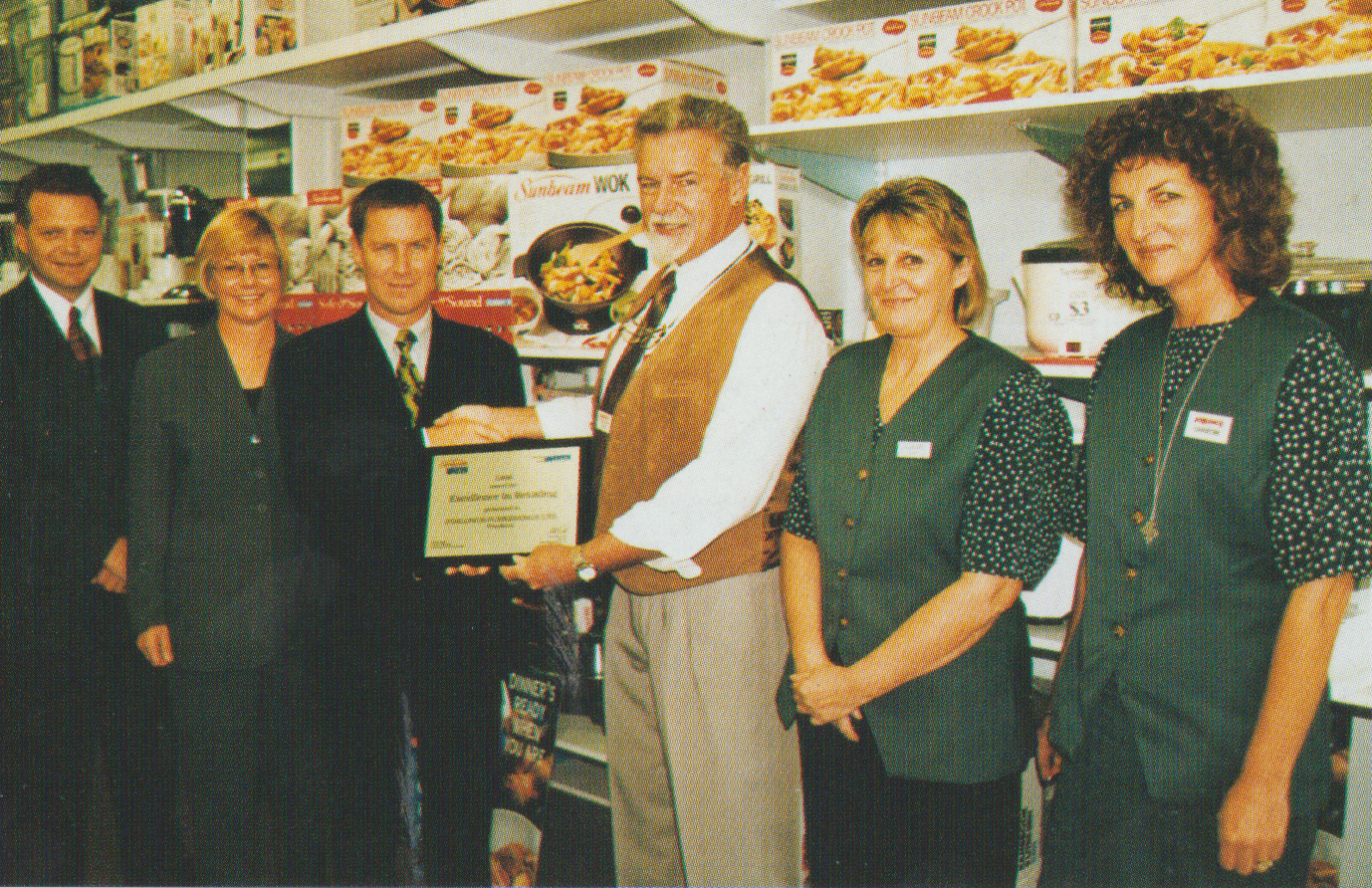 Not forgetting Forlongs – Forlongs Furnishing in Frankton, Hamilton was one of our truly iconic retailers (it was our “Retail Icon” in June 2012) and in June 1998 the small appliance Sunbeam department had just been awarded the Sunbeam Victa Award for Excellence in Retailing.

The Sunbeam team was out in force to mark the occasion (photo above): Greg Stevens (Sunbeam Account Manager), Sue Greig (Sunbeam’s Tauranga-based Territory Manager) and Roger Teague (GM of Sunbeam Victa) all dropped in to make the presentation to Department Manager Alan Mathieson and his team, Pam McDonald and Christine Falconer.

Sunbeam appliances earned pride of place in Alan’s showroom and he said: “Our range of appliances has grown tremendously since we separated from the hardware department. We now have all the space we need to offer customers the best selection with increased price options.”

Today Roger is on the road as Business Development Representative for Pyroclassic Fires and Sue works with husband Rick in the family business, The Poolcare Factory.

Alan retired and lives in Cambridge, Pam’s in Perth and Christine works on the family farm out Raglan way. Anyone know Greg’s whereabouts?

The now Slumberzone-owned Forlongs is part of Applianceplus after the Forlong family called it quits on the 70+ year-old retailer in 2016. 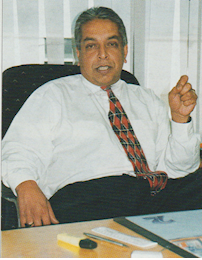 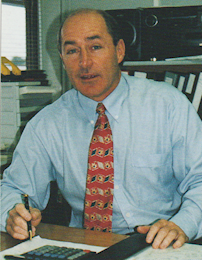 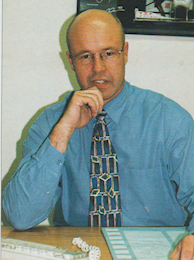 It was not long before John, now 93 years old, assumed sole ownership and branches at Karangahape Road, Takapuna and Newmarket followed over the next few years before eventually the group became a highly successful 10-store Auckland-wide chain.

In the early 1980s, John began selling off branches to independent owner-operators (the last to go being Takapuna in 1987) and Hill & Stewart stores were all part of the Fapay buying group which had formed in 1983 for the benefit of Fisher & Paykel franchised dealers.

In the mid-1990s, the irrepressible Mohammed Khan came on board as General Manager of the Hill & Stewart co-operative and, by the time Wares published a profile on the group in June 1998, he was Managing Director with Ross Kirkland as General Manager and Tony Hampton as Retail Development Manager (see photos above, L-R).

The trio had industry experience aplenty with Mo coming from Sanyo, Ross from Sanyo and Sound Plus and Tony from Noel Leeming and his own Retravision store in Nelson.

The article was all about what Mo saw as redefining Hill & Stewart’s future.

His stated aim was for Hill & Stewart to be the destination for home appliances rather than just a home appliance store in a destination shopping centre, a subtle but powerful difference in the eyes of the customer.

Nigel Merrett eventually acquired Hill & Stewart Group and sold it to JB Hi-Fi in late 2006. Four years later the doors would close and the brand disappeared for good.

Today, in retirement, Mo keeps his hand in through some consultancy work as well as assisting the Red Cross and the Friends of the Pacific Trust.

Ross is also retired and, with wife Christine, has been travelling a fair bit whilst Tony manages Kitchen Things on Moorhouse Avenue in Christchurch. 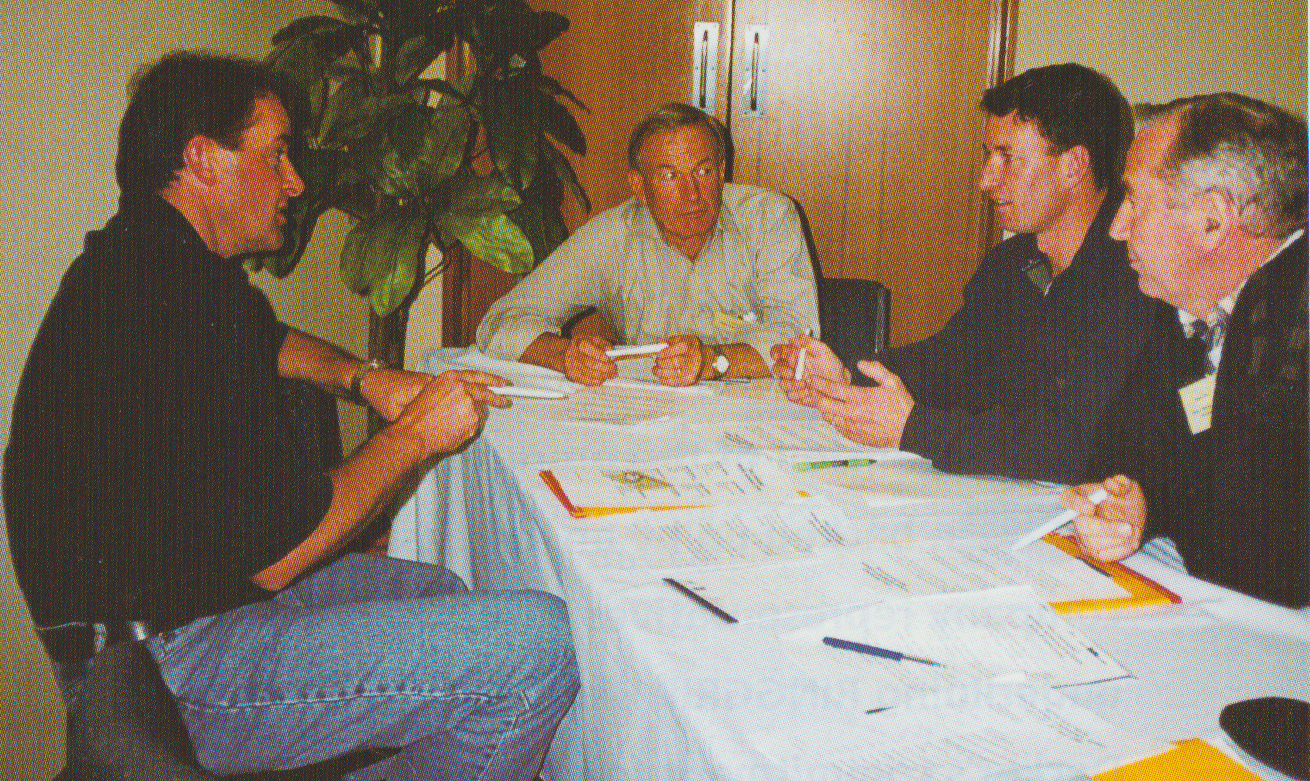 Betta banks on The Wizard – Christchurch’s Millennium Hotel played host to the 1998 Betta Electrical conference and the rather eccentric Christchurch Wizard gave an “electric presentation” on the “really important ingredients of success”.

Appnet had recently changed to Fisher & Paykel Finance and Tim Bibby detailed the many advantages of its hire purchase programme. Betta at the time being a predominantly cash-driven organisation, it was seen to be important that, in order to expand both sales and margins, members needed to improve their expertise in that area.

Appnet’s AGM kicked off Day 2 and following some pretty serious in-house sessions and lunch, The Wizard returned with a rousing performance during which he blessed all Betta suppliers and members.

The Friedman Group then gave a dynamic presentation on the art of selling and the need to facilitated staff training ahead of the awards dinner.

Main interest on the final day was the Betta Electrical Cup for the victorious team in ten pin bowling (also one of the highlights of the 2018 conference, please note!).

For the record, the Millennium never reopened after being severely damaged in the 2011 earthquake but took on a new life in March this year when the refurbished version became the Distinction Hotel. 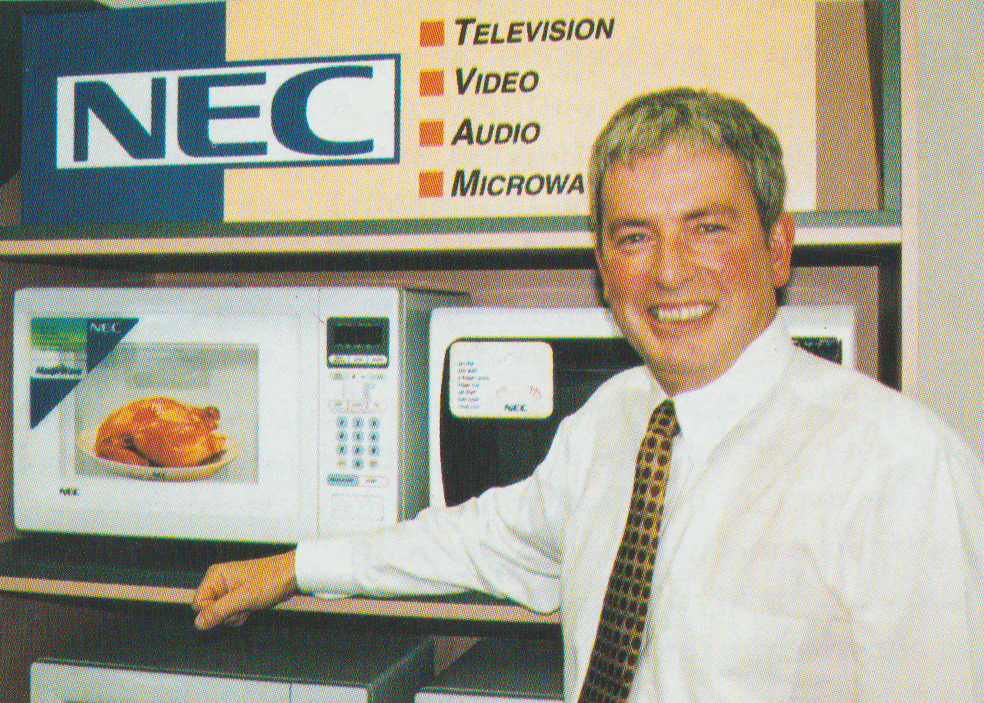 June Mid-1998 movers & shakers – The only mover & shaker 20 years ago in June was Donald Macdonald (photo above), who was the New Zealand Branch Manager for NEC Australia, soon to transfer to a position in Melbourne.

Donald later came back to Auckland, joining Miele where he spent six years before finishing in July last year.

He’s now working on his own account in lawn and garden care, so call him on 027 531 3574 for guaranteed top class outdoor maintenance.

Check out our previous instalments of "Rolling back the Years" here and keep your eyes peeled for more retrospective reading from June 2003 and 2008 in the coming weeks.