FROM THE WAIRARAPA TO WESTERN AUSTRALIA

George Young is the subject of our latest instalment in Wares’ “Where are they now?” series. George Young (seen above today) was just two years old when his family emigrated from Scotland to New Zealand in 1959, settling in Masterton.

A product of Wairarapa College, he left school in 1973 to take up the position of Cadet Foreman at NR Cunningham in Masterton, home of whiteware brands such as Norge, Simpson, Atlas and Dishmaster.

“The training at Cunningham’s was excellent,” he told me recently.

“I learned all aspects of the production processes and also had stints in both the Wellington and Auckland service and spare parts centres before assisting in setting up the Dishmaster plant which had been brought out of a Petone factory and re-commissioned at Masterton HQ.”

George was keen to have a crack at selling and left Cunningham’s in 1979 to work in menswear at Farmers Trading Company in Masterton.

He soon moved into appliances as the Department Manager whilst also working as an Electrolux vacuum cleaner salesman, selling door to door before work, in his lunch breaks, at night and at the weekend to earn extra cash with wife, Annette (see photo below from 1986), dedicating her time to being a stay-at-home mum.

“I really enjoyed Electrolux,” he says today. “It was commission-only but at $29 [$165 in today’s terms] per unit for a cash sale (and $23 if it went on Hire Purchase), it was pretty good money back in the day.

“I also chased up bad debtors in the area and received $4 for each monthly arrears I collected. The cleaners were $216 [$1,230 today] and on HP, the customer paid a $29 deposit and the balance at around thirteen bucks a week. Most months I would sell 30 plus units and my bonanza day was at a Home Show when I moved 33 units.”

As if working two jobs weren’t enough, George also started a busy DJ business in 1979, entertaining at weddings, corporate events and in the bars.

This activity he continued right up to 2013, except for some time out in 2004-2007 and indeed it served to net George new customers, both at Farmers and for his vacuum sales – and vice versa.

BELOW: Annette and George, circa 1986, at a Philips function. 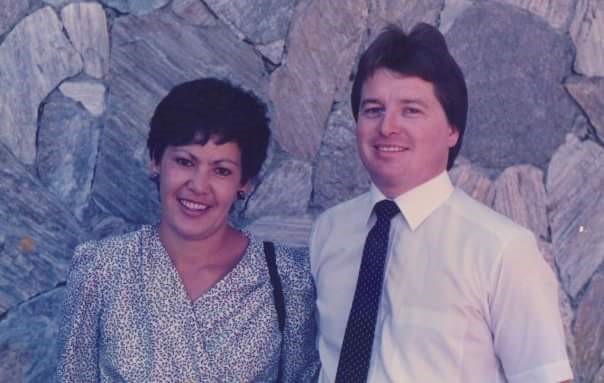 George had for some time, harboured a desire to become a rep and was further inspired by Mike Hall of Fisher & Paykel and Tim Kirkup, then at Sanyo.

But such a move had to wait because in 1980 he was poached from Farmers by local independent, Peter McKenzie, who owned Macsound.

In 1985 George’s interest in becoming a “Knight of the Road” was rekindled when he heard that Philips was looking for a Sales Representative to look after the lower North Island.

I was heading up the Philips sales team at the time and well remember meeting this vital, personable guy whom my Wellington Area Manager, John Manville, was keen to appoint.

To be honest, it was a no-brainer and we welcomed George on board.

“For my first six months I was selling the Pye brand,” he recalls, “then had Philips added before we discontinued Pye altogether.

“I also learned the adage ‘people do business with people, not corporations’ during my stay at Philips and live by it to this day.”

A couple of years down the track, George was offered a coveted Fisher & Paykel rep’s job but chose to stay put when he was appointed as Sales Manager for Marantz, the top end audio brand recently acquired by Philips.

He was responsible for establishing a group of hi-fi specialists around the country to form a Marantz dealer network, as well as service agents.

BELOW: George (centre) at Mason Communications, New Plymouth in 1989 in his role at TES. Towards the end of 1988, George was poached again.

This time, I was the poacher, having joined a Telecom joint venture company, Telecom Equipment Supplies (TES) ahead of deregulation of the telecoms industry on 1 April 1989.

I was establishing a sales team plus support staff to take Telecom branded phones and faxes out to non-Telecom sales outlets for the first time ever, primarily the appliance and consumer electronics dealers and I wanted George to be on my team in this truly exciting, ground-breaking venture.

Thankfully, he wanted to be part of history and accepted the offer.

“To be part of a group offering dealers telephones to sell for the very first time was an awesome experience,” George said when we reminisced last month.

“It was a roller coaster ride but we were successful and I’m proud that our small team introduced all the (then) cutting edge telecommunications products to our dealers.

“New generation phones, fax machines, answer machines and then cellphones. We opened the way for what we see in retail today.

“My TES time was magical, some of the best years of my life.”

Once the new distribution channels had matured in the deregulated environment, TES was later wound up and George, along with most of the staff, became redundant.

BELOW: The famous TES Regional Sales Managers (RSMs) George is second from the left.

A short stint with Wood Electronics led to George joining John Heginbotham at Newbolds 100% Your Electric Store in Masterton for a couple of years and then Radiola Corporation in 1994 (see photo below right), under the leadership of Brent Albiston, Steve Maguinness and his immediate boss, Charlie Unwin (“Where are they now?” October 2017).

Kenwood car and home audio, plus the full gambit of Samsung, made Radiola a formidable player in our industry. 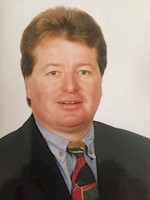 “My time at Radiola was great fun and a major highlight for Annette and me was a dealer trip to Hawaii for the Kenwood Cup offshore regatta in 1996. The Mason Appliances, Duckworths and Rices expos were also memorable events each year.”

George finished at Radiola in 1998 and briefly worked for Taylormade Furniture, then Newbolds again, in Honest John’s selling new and used appliances.

But in 1999 it was time he had a crack on his own account, opening Cash Creators and selling new and used appliances, beds and furniture.

George ran the business until 2004 at which time he sold out to Gisborne-based Fenns for whom he worked for six months before taking up a role at Quadrant Wholesale selling giftware around the country and attending gift fairs in Sydney and Melbourne.

That was a five-year exercise followed by another five with Vision Wholesale where he was Sales & Development Manager, involving roadshows, gift fairs and overseas buying trips.

BELOW: It's 1996 and Radiola used this Kenwood McLaren to showcase Kenwood car audio in Napier. 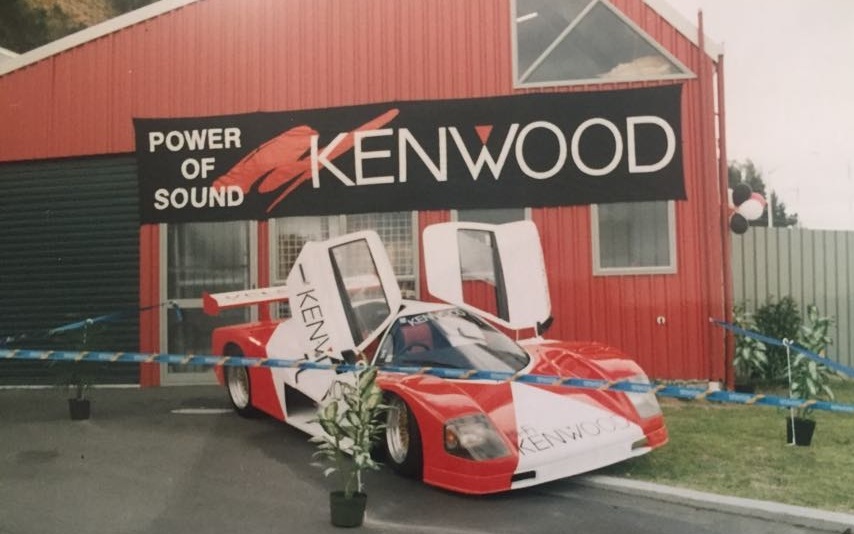 Perth and the “mid-life crisis adventure”

Then the Youngs had what George describes as “a mid-life crisis adventure” by moving to Perth in 2014, where three of their four adult children lived, along with grandchildren.

George joined the team at Kambos Appliance & Homewares Warehouse, the largest independent in Western Australia, as Senior Sales in whiteware.

There he worked at building up a solid clientele until last year when he made a complete change – he became a tunneller (photo right)!

Yes, far from the bright lights of the Kambos showroom, he now works for Salini Impregilo on the 8km Forrestfield-Airport Link twin train tunnel project linking Perth airport and the Eastern suburbs to the central city line, including a section running under the Swan River.

George was also recently promoted, which sees him also training young people new to the job.

When finished, the new route will mean a trip from the airport to the CBD will take just 20 minutes.

George Young remains a really engaging character and, like those before him in this series, he is welcome to have the last word.

“I’ve been privileged to work with some of New Zealand’s leading suppliers, retailers and sales staff, making many life-long friends,” he says.

“I’ve gained an encyclopaedia of knowledge and have lots of cherished memories and stories to share. Thank you to all those who have been part of my journey, I’ve enjoyed the ride!”

BELOW: George catches up with his Radiola Boss, Steve Maguiness, in February this year. 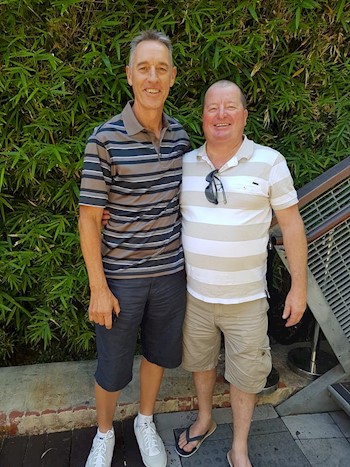 Check out all of the instalments in our “Where are they now?” series here.