"BUTTONING BACK"? NO CHANCE!

Showing absolutely no signs of "buttoning back", Dave Barden is the April instalment in our “Where are they now?” series. 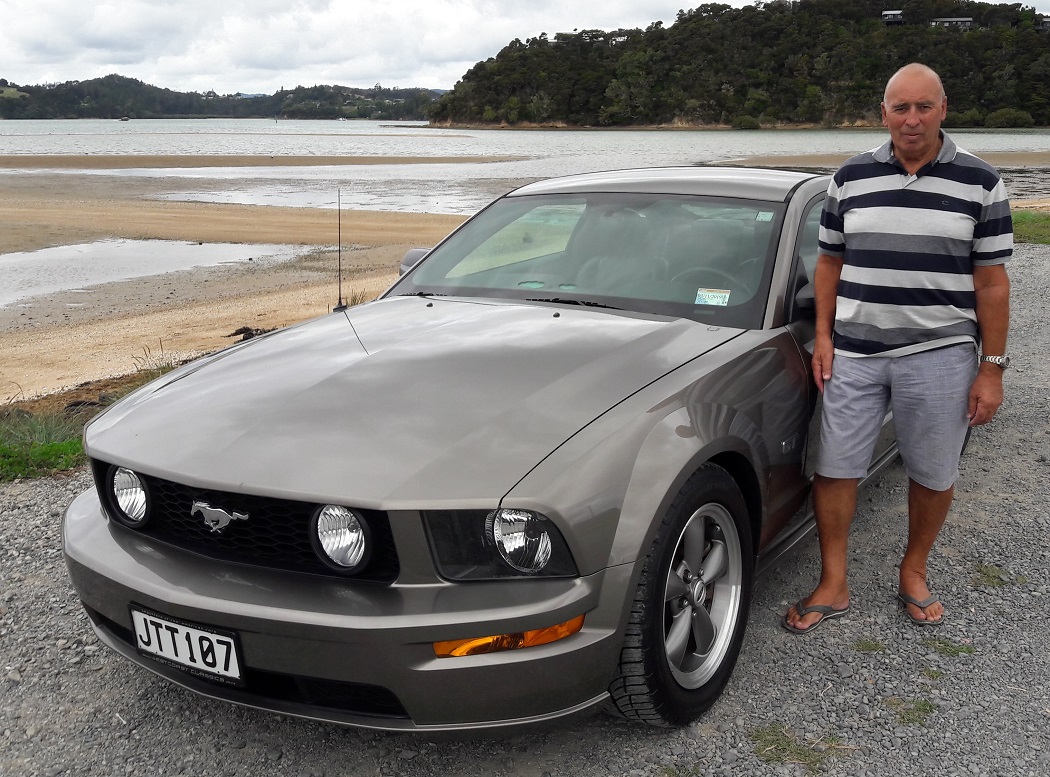 He also attended night school and achieved certification in electronics.

Keen to apply his skill-set in sales, Dave applied for a role with National Electric (Neeco) in New Plymouth, but ended up working as a Sales Engineer out of the Wellington head office.

Two years later he was Sales Manager at HW Clarke and it was during this time that he met Sue Truscott, the couple marrying in 1975.

In 1974 Dave was head-hunted by 3M, joining as a sales rep then quickly becoming Sales & Marketing Manager for the Electrical & Information Storage Group.

“As a member of the international development team, I had one of my ideas adopted and taken to market globally, but in 1987 it seemed like the time to move on.”

From Hoover to Parex

The opportunity to try something different came when Hoover established itself in New Zealand.

“It was tough going!” recalls Dave, “F&P had had the Hoover brand and our biggest challenge was gaining distribution.

“We secured Betta Electrical and the non F&P Retravision members, but spent a lot of time in court trying to break down the Fisher & Paykel Exclusive Dealer Arrangement, the EDA.”

Hoover NZ later took on Maytag as a secondary brand, “pinching” Bevan Baker from F&P to look after it. (As an aside, Bevan became Sales Manager at Eurotech and has since retired to live in the Bay of Islands.)

In 1992, Dave left Hoover to join Parex Industries as National Sales Manager, working alongside Paul Tooley (“Where are they now?” April 2016).

From Monaco to “kicking back”

After a couple of years, Dave received a phone call from the inimitable Nick van Dyke at Monaco Corporation.

Those who know Nick will understand it was more a summons than an invite and the language was “colourful”.

That was in February 1994 and Dave joined Monaco as National Sales Manager, staying until September 2003.

Dave explains: “I spent a great deal of time with the major retail groups so in 1999 we changed my role somewhat and I became Major Account Manager/National Sales Manager and a few of my other responsibilities were reallocated.

“This worked out really well but then, in July 2003, I resigned – time to do new stuff.

“It took me three months to finally make my exit from the place and it seemed like a big fanfare from all those great people from the appliance groups.

“They were special times.”

By this time, Dave was 55 and wanted to “kick back a bit” so he and Sue moved to the Bay of Islands, not to retire but to combine work with a much more relaxed lifestyle.

Now, I don’t know how you define “relaxed”, but what transpired hardly fits my definition of the word…

BELOW: Dave and Sue at the 2003 Retravision conference at Surfer's Paradise. 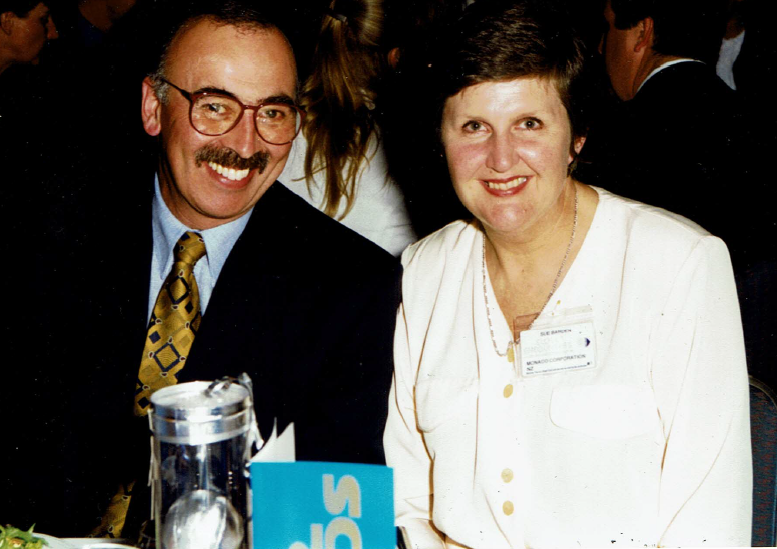 Being a “brand man” from way back, Dave took on a Green Acres franchise knowing he would enjoy extensive national promotional support.

Actually, he bought the Master Franchise for Bay of Islands-North, including lawns, home and commercial cleaning, pool maintenance and pest control – plus a carpet overlocking business which would eventually be sold to Brian Jolly.

Sue and Dave worked hard at the business and ended up with five franchisees.

Just to make sure he was “really busy”, Dave also worked for a year in the background, managing four retail stores for the Hewlett Group.

Hewlett Group was owned by Neil and Pattie Hewlett, who had bought Brian Jolly’s two Retravision and two Beds R Us stores.

In amongst all that, Dave also took on a part-time role sorting out the marketing, planning and purchasing for the local Mitre 10 store!

See what I mean about “relaxed”?

Time waits for no man…

That took Dave to October 2007 and, in his words, “time was marching on”, so he quit the retail positions and sold the Green Acres business.

The Manager of Carters Building Supplies in Kaitaia was a friend of Dave’s and recommended him as a rep at Carters Opua, on the outskirts of Paihia.

Says Dave: “I was nearly 60 – ‘too old’ I said – but they wouldn’t take no for an answer so I had two wonderful years and a whole lot of fun as a Key Account Manager in the building supplies industry.

As you will have already figured out, Dave and Sue are not a pair to sit idle and they then bought back the cleaning franchise, built it up again and on-sold it in 2013.

By now, Dave’s Super Gold Card had arrived, but he still wasn’t done and accepted a role as Key Account Manager/Major Projects Manager for a new ITM store opening up in Paihia, a job which he only pulled stumps on at the end of 2016.

Surprise, surprise, almost immediately after resigning, they asked him to come back part-time and more recently sweet-talked him into being Health & Safety Auditor as well!

Dave has been involved in the marketing of his brother in law’s business, TCK Australia (Trailer Coupling Kits – for truck & trailers).

Domiciled in South Australia since 2000, in 2017 TCK Australia The New Zealand Connection was formed at the home of Dave & Sue Barden (Dave is Country Manager) with a small distribution warehouse almost next door (see http://tck.com.au/).

Dave Barden clocked up 71 years of age in December, but has no intention of “buttoning off”.

Reference the fact that, on top of everything else, he and Sue still clean the windows of a number of fancy homes and manage a 920m2 home on a large property for an absentee owner.

So – spare time is not thick on the ground for the Bardens.

The petrolhead pair sold their Harleys a few years ago (photo below) and now their passion is a 2005 Mustang (see opening photo!).

They also have a large caravan in which they travel, mainly around the Northland area and which serves as the office on regular occasions.

On his time in our industry, Dave has the last word:

“Wonderful brands, wonderful people. I enjoyed every moment, and often reflect on those good times.”

BELOW: Dave & Sue at a Harley Owners Group - HOG - rally. 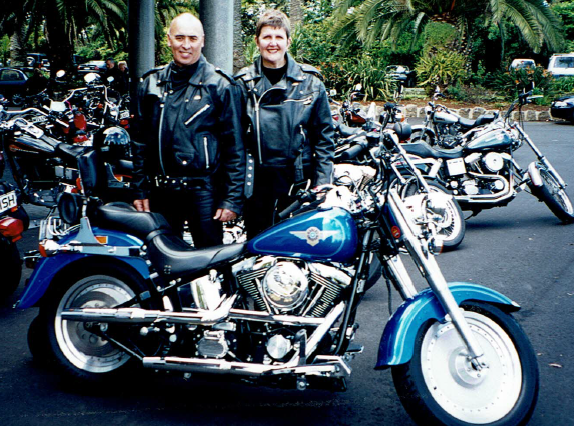 Browse through all the episodes in our "Where are they now?" series here.