CAN WE BE OF ASSISTANCE?

This year’s International CES was about voice assistance and AI, amongst other things. Admittedly Las Vegas lends itself more to the “A” (Artificial) than the “I” (Intelligence), but there was plenty of both on show this January. 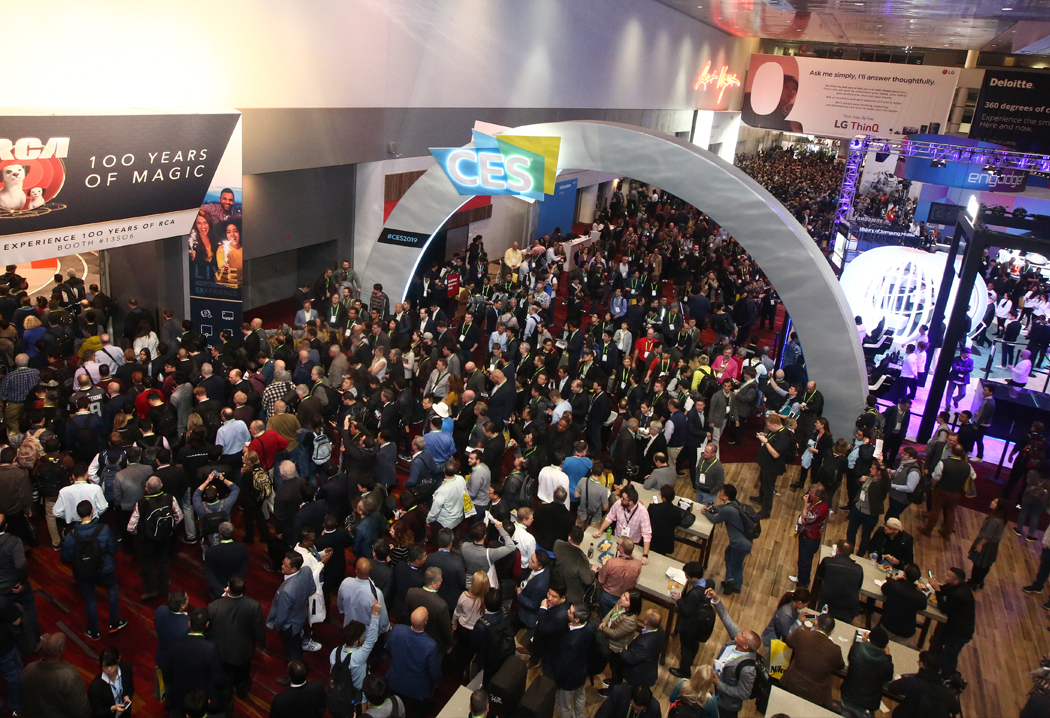 This time last year, with International CES celebrating its half century, we were talking about “The battle for control – of voice control… The fight is on for a share of voice”.

Again heavy hitters Apple and Microsoft (which has all but given up its AI/voice assistant Cortana anyway) were absent from CES, leaving the field open for Amazon and Google to scrap over the hearts and minds of attendees for the second year running.

Alongside the health-tech, the self-driving cars and the impending promise of 5G, as you’ll see, AI in one form or another got around many if not most product categories in Las Vegas this year…

Impact wise, LG easily made the biggest splash with its mould-breaking “rollable” TV, the LG Signature Series OLED TV R (65R9) which garnered much media interest and was a standout in what pundits have been labelling as a fairly unexciting category.

This world-first offers not only a 65-inch screen in full view mode but also a “zero” mode option where the voice-activated screen rolls completely out of view into its own base (“like a burrito” said one commentator) but can still play audio content from its in-built Dolby Atmos audio system.

A “line view” option is also available where the screen partially pops up to show a home dashboard displaying time, weather, photos and more and allowing music streaming.

These aspects are courtesy of the inclusion of Apple’s AirPlay 2 and either Google Assistant or Amazon’s Alexa, both of which are built-in.

Also with AirPlay 2, but not baking either voice assistant into its TVs (you’ll need an Echo or Home to help there), arch-rival Samsung – as you can see from the Frame TV launched last year – is another playing with form factors and is rumoured to be working on its own rollable design that may also unfurl – horizontally…

The other big news in TV was that Apple plans to make its “Apple TV” service available exclusively on Samsung devices.

In effect an iTunes Movies and TV Shows app, the feature will debut only on Samsung Smart TVs in more than 100 countries, for the first time outside of Apple’s own devices or a computer running iTunes software.

This clever-slash-controversial move has some suggesting that Apple could potentially be cannibalising its own hardware sales but others see it as a smart long term move for the company which has continued to see growing returns from its software and service offerings rather than hardware.

The other big televisual story from CES is that this year consumers will be treated to yet another hike in TV picture quality, with the show hosting several 8K TV launches, all within top end models.

With 8K TV offering four times the resolution of a 4K TV, over time it will likely supplant 4K as the highest quality TV picture.

Samsung followed up its prototype launch last year with an impressive market-ready 8K QLED range, including a massive 98-inch model, which will upscale any content, irrespective of its native resolution or source to the higher resolution.

Sony was also among the 8K launches, showing off its new MASTER Series Z9G 8K 85-inch LCD which will become available in the second half of 2019.

The new “MASTER” brand will be applied to only “the very best” models, says Sony, and these will also feature Netflix Calibrated and IMAX Enhanced modes to create cinema-esque experiences.

Along with Samsung, Sony also announced that it would be incorporating Apple’s AirPlay 2 into its TVs, allowing users to natively screen mirror or cast from a compatible Apple device.

Plus, Sony is incorporating Apple HomeKit into its Android TVs, the irony being that Apple’s Siri could end up controlling Google-motivated TVs!

By the way, for consumers not wishing to fork out for a new, full-blown voice-driven TV, high profile direct-broadcast satellite television provider Dish announced at CES that its Hopper receivers and DVRs would soon come with Google’s voice assistant built in, meaning you can use voice to search for TV content. 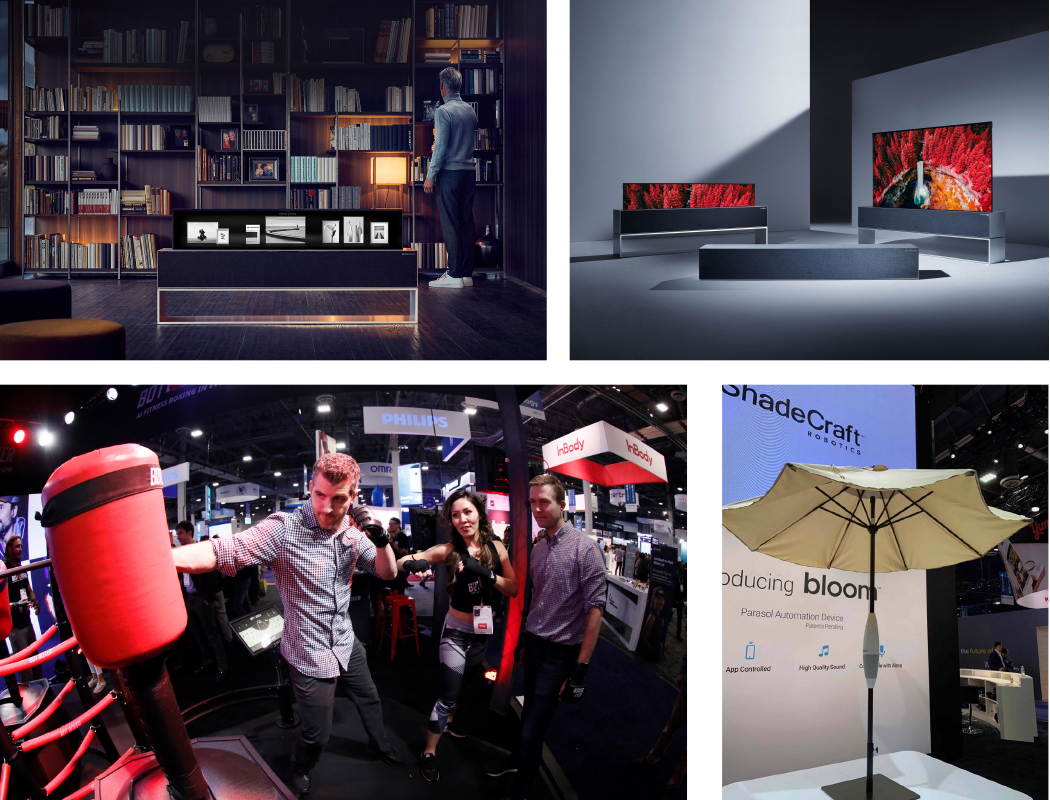 Google was at CES in its own right and with boots on, announcing partnerships with Sonos, Dish Hopper and Samsung, and that it expects Google Assistant to be installed on a billion devices soon, including the current base of Android phones – fully 10 times the number of Alexa devices Amazon says it’s sold so far.

To further drive this momentum, Google used CES to launch its Google Assistant Connect programme, which is akin to Amazon’s Alexa Gadgets Toolkit launched last year and is designed both to help make integrating voice assistance into devices cheaper and easier and make operation of the devices simpler for the user.

To show this offering to best advantage, Google seemed to have almost literally knocked together two super-simple yet “smart” devices – a smart button and a fridge magnet-sized e-ink screen – the former acting like one of Amazon’s single-function Echo Buttons, the latter configurable to show quick-fire information from another device.

After smartphones, where we take Siri and Google Assistance for granted these days, smart speakers have been the second wave of devices incorporating voice and AI and CES this year had several key launches in this respect.

Sonos, having pre-announced Google Assistant support quite a while back, reiterated its incorporation on its latest speakers including the Sonos Beam and the Sonos One, which had Alexa compatibility from day one.

House of Marley also debuted a battery-motivated smart speaker that was rocking Google Assistant, The Get Together Mini, which bears the brand’s key material characteristics and a high proportion of sustainable materials.

JBL too used CES to announce finalised plans for its previously announced JBL Link Bar soundbar. It’s not just this product’s sound that’s controlled by Google Assistant, but it can also show video on a connected TV and overlay Google information on top.

THE RISE AND RISE OF SMART PRODUCTS

Staying with Google and adding to a growing number of small smart displays that also includes products from Archos, was the Lenovo Smart Clock, with a 4-inch screen and a clear bedside orientation.

Possibly of more import was a smart display from appliance maker KitchenAid, complete with highish water resistance and a built-in library of recipes courtesy of stablemate Yummly.

GE too showed off its previously shown $1200, 27-inch touchscreen that’s designed to sit above your cooker (and therefore out of the way of any cooking accidents). In effect a full-blown Android tablet, it offers multiple functions

JBL’s Link Drive and Anker’s Roav Bolt were also on show at CES, both aiming to take Google Assistant into the car affordably (US$50-60).

Both plug into the cigarette lighter for power and both send the audio to the car’s stereo via Bluetooth (or a 3.5mm jack), allowing drivers to voice commands for the car’s built-in music or navigation.

Kohler built a complete smart bathroom for Las Vegas, using Google for a smart mirror and Alexa for its Numi 2.0 Intelligent Toilet, while Capstone unveiled a cross between a smart mirror and a touchscreen smart display, Simplehuman had its Mirror Hi-Fi and Moen had a smart shower with Google Assistant (it already has Alexa versions.)

A clever and unexpected product boasting Amazon’s Alexa (and later maybe Google Assistant) was –wait for it – a smart garden parasol from ShadeCraft Robotics.

Said shadey product is called Bloom and will open or close if asked to do so, or play music via the built-in speakers.

ShadeCraft however also has plans to integrate Alexa completely so Bloom can function just like an Echo product, which means the parasol will tell you about the weather, the length of today’s commute, the best buys in smart products...

Whilst we’ve tried to cover most of the big announcements at this year’s International CES (and some we just thought were cute), there were many, many more new products and
exhibitors.

Usefully, the show organisers have pulled together an extensive new product launch page covering many of the smaller or less well-known brands’ launches which you can access here: 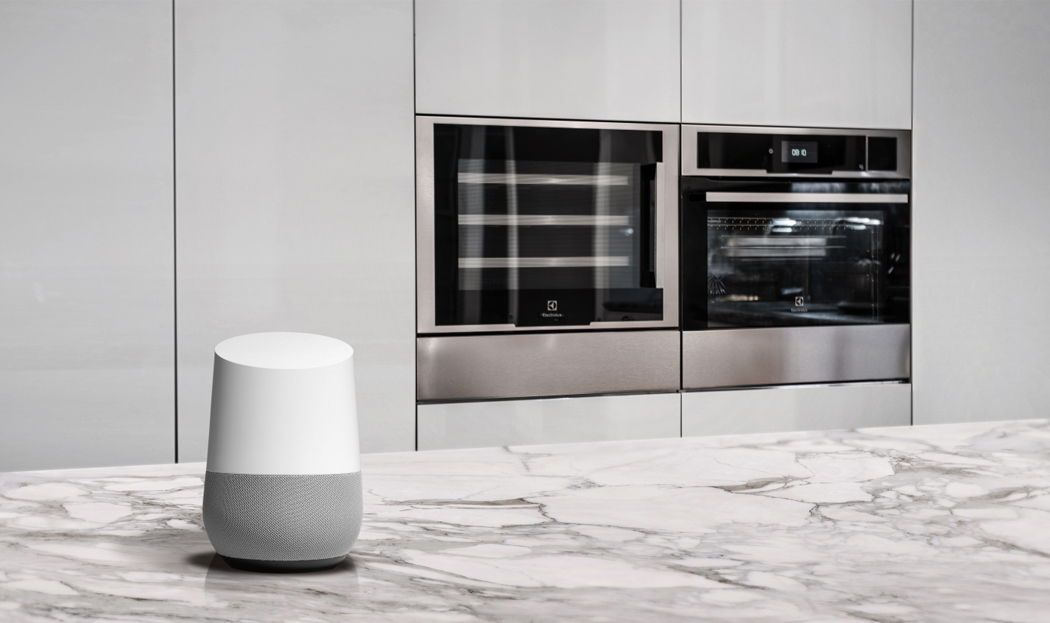 Whiteware ventures among the “brown goods”

Electrolux, through its Anova brand, was one of the very few appliance makers to venture among the consumer electronics brands at CES this year.

Electrolux took the opportunity to announce that it would be launching Google voice integration with its smart ovens in early 2019.

In the US market, Electrolux has already integrated Google Assistant and Amazon Alexa into its connected Frigidaire air conditioners, while Anova product also works with both digital assistants.

Laptop wars – all about displays

As well as providing a platform for a new wave of TVs, CES 2019 was also the venue for a bit of a shake-up in the laptop category.

Alienware, for example, claimed a world first with the light, powerful m15 gaming laptop, which should be the first to market featuring a 240Hz OLED display (left).

Set to arrive in March, Alienware’s delivery date possibly took the wind out of HP’s sails, with its grunty, gamer-orientated Omen 15, also boasting one of the very first 240Hz displays with a 15.6-inch, 1080p panel, not due until mid-year.

HP also announced that it would release the first 15-inch laptop with an AMOLED display. The Spectre x360 (left) promises fully a third more colours than regular sRGB screens and a top end 100,000:1 contrast ratio.

Other laptop trends are towards even lighter weight, ever more power (you can never have enough!), reducing bezels and different form factors (beyond removable keyboards).