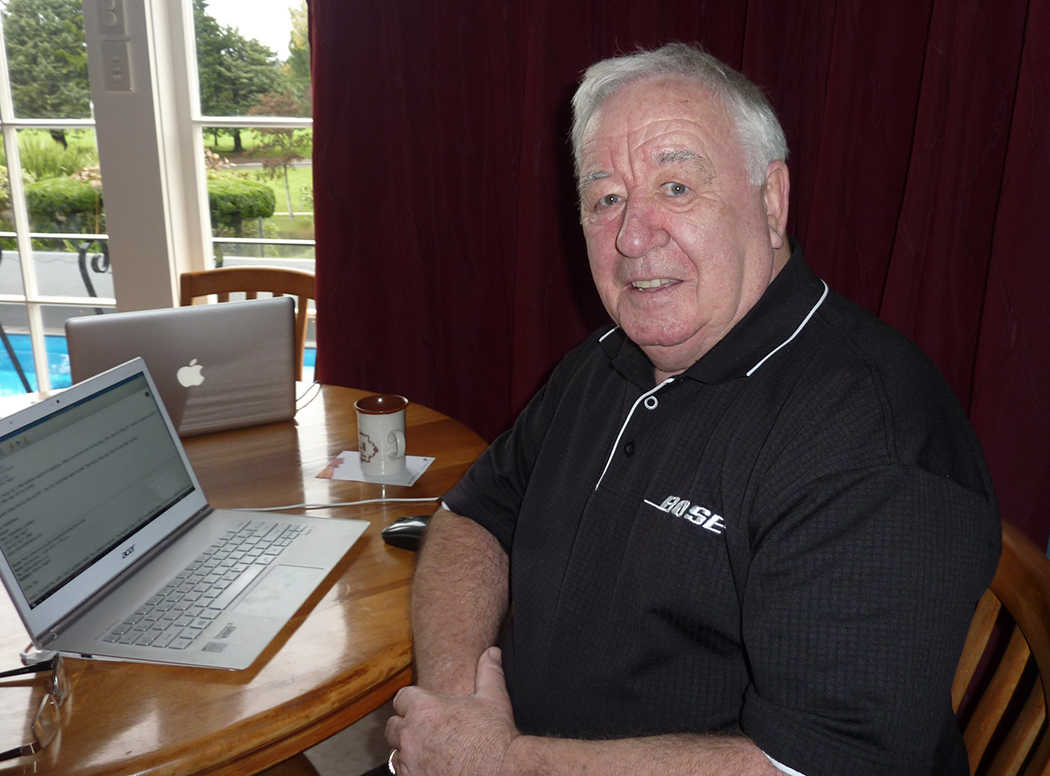 By 1956, when he was in his mid-teens, Jim Bulloch had started a radio & TV technician’s apprenticeship in Scotland, at the same time as attending an electronics course at night school, working in a film studio and playing guitar in a band.

He emigrated to New Zealand with his parents and twin sisters in 1959, initially freelancing in service work for various Palmerston North retailers. He also formed his own band, Jim & the Jets, which would play on until the mid-1960s.

In 1960 he joined Borham’s Radio Service at 34 The Square, Palmerston North, as manager and technician. Ernie Borham was a pioneer of public address systems in New Zealand so the 19 year-old Bulloch spent most of his weekends on racecourses.

A year after Ernie’s death in 1960, the shop was closed but purchase was not an option for young Jim. “The rent for the shop was £12.10 a week [just over $500 today], too much for me,” he says. “So I bought the PA side and resumed freelancing my servicing skills around town. That was my first business, Manawatu Sound Service.”

In 1963 Jim Bulloch bought Downs Radio, a PA business in Marton. But it was in 1967, aged 26, that he entered the retail scene in his own right, buying Rexels on Palmerston North’s Main Street. This shop sold mainly mono (valve) hi-fi and records but, importantly, it also marked the birth of Manawatu TV & Sound Service, now something of an icon in the industry.

In 1969, Manawatu TV & Sound moved next door, into bigger premises. Jim then bought and closed Ingram’s TV & Appliances, taking over its coveted Tellus vacuum cleaner franchise. Then, in 1977, a second shop opened at 78 The Square, adding musical instruments, with Hammond organs the flagship products.

In 1981 Jim purchased the building at 34 The Square which had contained the original Borham’s Radio Service shop. Two buoyant years passed and, Jim was ready to take on all-comers, but his vision required much larger premises.

So he bought the Watson Bros building at 116-120 The Square. The new building was fitted it out with sound rooms, a computer section added and, for the first time, Simpson provided whiteware.

In 1992, Jim took over Central Power’s retail and service divisions. With two Palmerston North shops, plus Feilding and Pahiatua, rebranded Central Power Appliances, now the company also had an F&P franchise. But, within a few months, Noel Leeming and Farmers also had F&P and later, Harvey Norman arrived...

Jim Bulloch sold Central Power Appliances in 2000 and went with Whirlpool as his sole laundry & refrigeration brand for Manawatu TV & Sound. “What a breath of fresh air!” he says today. “Alan Dalton looked after our account and gave us wonderful service.”

But, as time went by, Jim got sick of trying to match prices and terms on whiteware. So, in 2002, he sold the big building and consolidated everything back to where it all began, to 34 The Square. Whiteware and appliances got the flick and here he was, once again making decent margins from TV, audio and musical instruments!

Jim Bulloch was an inaugural Appliance Guild Board member, two-term President and Life Member. To this day he remains the sole Director of Manawatu TV & Sound Service. It’s still at 34 The Square and most days he spends time in the shop, where daughter Mandy manages the administration and David Iwikau runs retail.

I leave the last word to Jim Bulloch: “When I look back over the years, I know I was well and truly blessed to be in an industry I loved so much and to meet so many good people. Thank you all, for your friendship and company!”