A round-up of some of the latest news in the wearables, personal care & health category.

Not a "smart" watch as such, market-making Swiss watchmaker Swatch has teamed up with Visa to produce a smart solution to contactless payments.

Armed with Swatch’s new “pay-by-the-wrist” Swatch Bellamy watch (photo above), next year eligible Visa cardholders in the US, Switzerland and Brazil will be able to tap and pay anywhere that contactless, NFC-based (Near Field Communications) Visa payments are accepted.

Usefully, as contactless transactions require absolutely no energy at all from the watch itself, customers can expect the usual Swatch battery life.

The Swatch Bellamy by the way is named after American writer Edward Bellamy, whose 1888 novel Looking Backward 2000-1887 envisions a utopian world in which cash has been replaced by credit/debit cards. 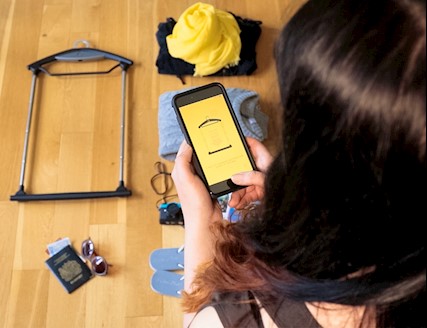 A smart scale, for frequent flyers

Regular travellers will like this idea. Weigh-to-Fly is an extendable luggage scale which sends real-time updates to your phone as you pack your bag.

It has an adjustable, lightweight, telescopic frame that slides and locks to fit whichever size case you want to take. Once the case is placed on top, the sensors in each of the corners send updates via Bluetooth to your smartphone, so you can see instantly how close you are to the weight limit at any time.

The accompanying smartphone app knows every major airline’s weight restrictions and even takes account of the weight of the device (450g). Plus, Weigh-to-Fly has been designed so it can act as a “coat hanger”, for easy storage and extra utility.

Apple still smartwatch market leader – Apple held onto its sizable lead through the second quarter of Apple Watch, says Canalys (www.canalys.com), having shipped nearly 7 million watches since launch. In context that’s more than all the other vendors’ combined shipments over the previous five quarters.

But who is Number Two? – Still with Canalys, the firm reports that Apple was the only smart watch vendor to ship more than 300,000 units in Q3. Who else has a look-in? The quarter also saw the release of the Pebble Time Steel, which helped the company ship 200,000+ total smart watches, while Samsung’s Gear shipments declined ahead of the Q4 release of Gear S2. With both Fossil and Tag Heuer launching their first smart watches, the #2 spot is up for grabs.

Be sure to stay up to date by visiting our Wearables, Personal Care & Health category regularly.