We don’t often put our opinion above our readers’, usually preferring to mirror what the market thinks. But, with Christmas on the horizon, we’re putting our 10 cents’ worth into the hat. 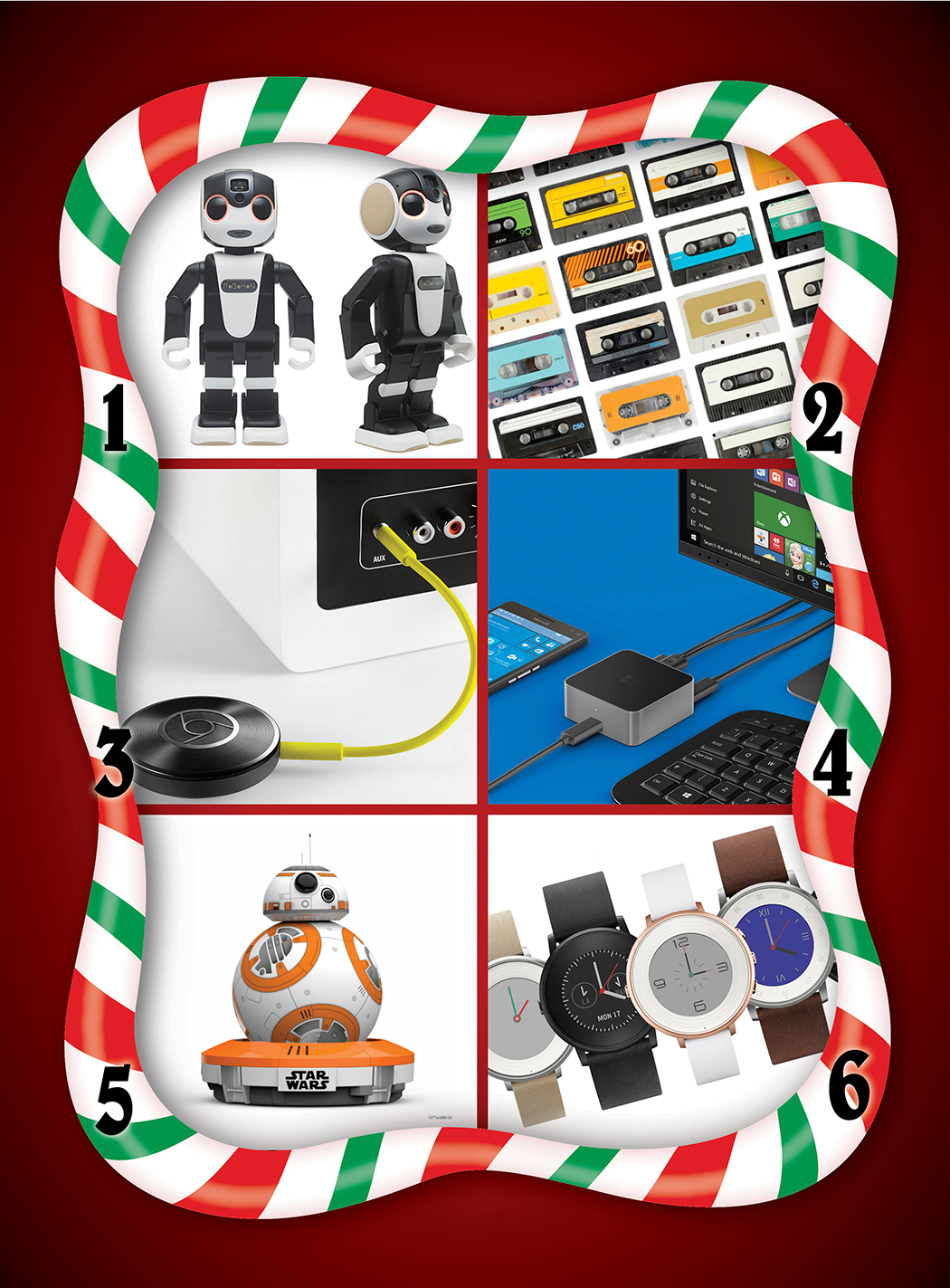 At first glance, Sharp’s RoBoHoN is a gimmicky phone with a human shape. It’s hot because it heralds the reality of a robot companion. Anyone who saw the excellent 2012 film Robot & Frank, about an aging crook who is assigned a robot butler, will understand what we mean. Standing at almost 20cm, RoBoHoN has voice and face recognition so he can respond to voice commands, read emails and texts, call taxis, search and sort files. And, when he’s not projecting the movies and stills recorded by his camera, he’s entertaining your friends with his walking and dance moves. With an aging population and more only-child families, RoBoHoN could have mass appeal at both ends of the age spectrum. Really.

If you’re looking for reasons to bring tapes back, just think “mix tape” (a la Guardians of the Galaxy). No curated Spotify playlist will ever come close to recreating that intimacy. How many young hearts were won (and millennials conceived) with a properly coordinated song selection in the 80s or 90s? Cassette maker the National Audio Company (NAC) for one is seeing a groundswell of support, led by hipsters and musicians, who see tape as their way of rejecting the digital world. NAC sells quality C60 audio cassettes for less than US$0.80 each to go with those vintage Sony Walkmen available on eBay etc. We also hear reel to reel tape is making a comeback. Ah, those were (these are?) the days…

It’s been two years since Google launched its clever Chromecast HDMI dongle that pushed HD video content from a phone or tablet onto a bigger screen. Now, we think, Google’s new US$35 Chromecast Audio will do the same for music. It’s hot because it uses Wi-Fi to stream music to any audio system with a spare AUX (RCA) input or standalone speakers with a standard 3.5mm jack. So you can stream music or apps like Pandora from your phone, mobile device or whatever. All that fancy hi-fi kit you bought when you were younger can now enjoy a new digital life.Chromecast Audio will handle big files, big bit rates and the fastest internet speeds. It’s available in 17 countries but not here, through Google at least.

Who would’ve thought anything Microsoft did these days was hot, but its new Windows 10 devices are shaping up that way. There are stylish Lumia smartphones and power-packed tablets. The phones’ features include a 20MPl camera on the back, USB Type-C port and, most exciting and useful, it lets users turn their phone into a Windows PC. All you need is a small piece of hardware called the Microsoft Display Dock, a screen and a keyboard and you’ve got a desktop setup. The Microsoft Surface Pro 4 tablet looks set to smoke the competition too. Why? It’s not just a high-end tablet, Microsoft has packed it with enough power to easily handle any computing task and replace the laptop altogether.

You will have heard that Star Wars: Episode VII The Force Awakens will be hitting cinemas in December this year. This has created renewed interest in not only existing Star Wars-themed gadgetry but also a raft of merchandise. Our standout has to be Sphero’s BB-8 rolling ball droid toy. It can be controlled with iOS or Android devices and a companion app offers modes for driving, holo messaging with augmented reality on your smart phone and an autonomous self-guided mode that learns about its environment. BB-8 also listens and responds to your voice and adapts its actions and responses. BB-8 is smart, engaging, clever and cute and its connection to a major movie franchise made it a given for inclusion in our hotties list.

Reviewers are calling the new Pebble Time Round smartwatch the best smartwatch around. We agree. Why? Well, first because it looks like a beautiful classic watch. It’s also the lightest, and at only 7.5mm, the thinnest smartwatch in the world and 30% thinner than the Apple watch. OK so thin gives in to battery life but Time Round still gives you two full days between charges and battery charge time is a rocket-fast 15 minutes. Compatibility and software both get a big tick too, so you can view notifications such as texts, emails and phone calls and it’ll work with many fitness tracker apps. The biggest plus is the price – just US$249 – but it’s not available so far through any NZ retailers.

The Elvie intelligent pelvic floor exercise tracker combines a sensor-packed device and an app. We like this because before we turn our public gaze to prostate cancer and Movember, this is an affordable wellness device that will help hundreds of thousands of Kiwi women lead more comfortable lives. “Weak pelvic floor muscles lead to incontinence and prolapse - particularly in women after childbirth and menopause,” says Dr Boler. “Elvie prevents and treats these problems.” Women insert the egg-shaped tracker into their vaginas and then clench around the device in five-minute workouts designed to ‘lift and tone’ and this information is relayed via BlueTooth to a mobile app to offer real-time feedback.

Virtual Reality (VR) headsets like Oculus Rift get plenty of press but are expensive. The new Mattel View-Master changes all that, cleverly combining the power of a smartphone with a mix of AR and VR in a US$30 headset with retro appeal. The new View-Master is powered by Google Cardboard VR technology but, unlike other Google Cardboard viewers, is sturdier and works with smart phones of all sizes and operating systems. View-Master also has its own family friendly apps called “Experience Packs” in the form of classic View-master disks which now come alive when viewed through the headset. Virtual technologies, educational content, nostalgia and low price point all make View-Master a “hotty”.

A stupidly simple and affordable way for Amazon to get a toehold in the smart home and Internet of Things, the US-only Amazon Dash Button is a Wi-Fi connected one-touch device for reordering common household consumables. The major benefit of this simple little adhesive dongle is that it can be stuck in convenient locations like a washing machine, fridge or kitchen cupboard so that the moment an item is seen to be running low it can be reordered (on Amazon of course!) and delivered before it runs out. There are already a large range of household products with assigned Dash Buttons and more recently appliance brands like GE have also got in on the act.

Described as “part toy, part video game, all-out high-speed family fun”, Anki DRIVE is a battle / racing game where small cars (physical, not virtual!) are controlled with an iOS or Android smartphone app around a “smart” floor track. Up to 4 Anki DRIVE cars can race per game, in a range of racing and battle modes. Cars not controlled by a smart device can drive themselves as an AI controlled opponent. Anyone who ever owned a Scalextric slot car set or has ever played a racing video game can see that Anki DRIVE is a very cool idea and that’s why it’s on our list. Anki DRIVE is currently only available in the US and UK.

The DxO One is described as a “DSLR-quality, ultra-compact camera that pairs perfectly with your iPhone”. The Wall Street Journal has this to say about it: “The ambitious new DxO One takes stunning 20.2-megapixel pictures from a device that’s half the size of a deck of cards. The secret: It’s a pro-level image sensor and bright lens that plugs onto the base of an iPhone, which serves as the viewfinder and central command.” DxO One makes it on to our list because it’s a well-designed add-on that fits a gap in the market vacated by the compact cameras currently gathering dust on the shelves of iPhone users across the country. Olympus has a similar product but it isn’t available here.

Sick of fishing your charger cable out from behind the desk or your handbag? The benefits of wireless charging are obvious. There are many, many wireless recharging pads currently on the market but they still have a cord and need a plug – so for our money the IKEA Riggad Work lamp takes the best advantage of this growth technology. Using an already plugged-in device to power your phone offers real value to customers by reducing clutter. IKEA uses the Qi recharging standard and has a range of wireless recharging solutions with modular options that can be built into desktops and tables as well. There are currently no IKEA stores in New Zealand. An opportunity for our readers who also sell furniture. 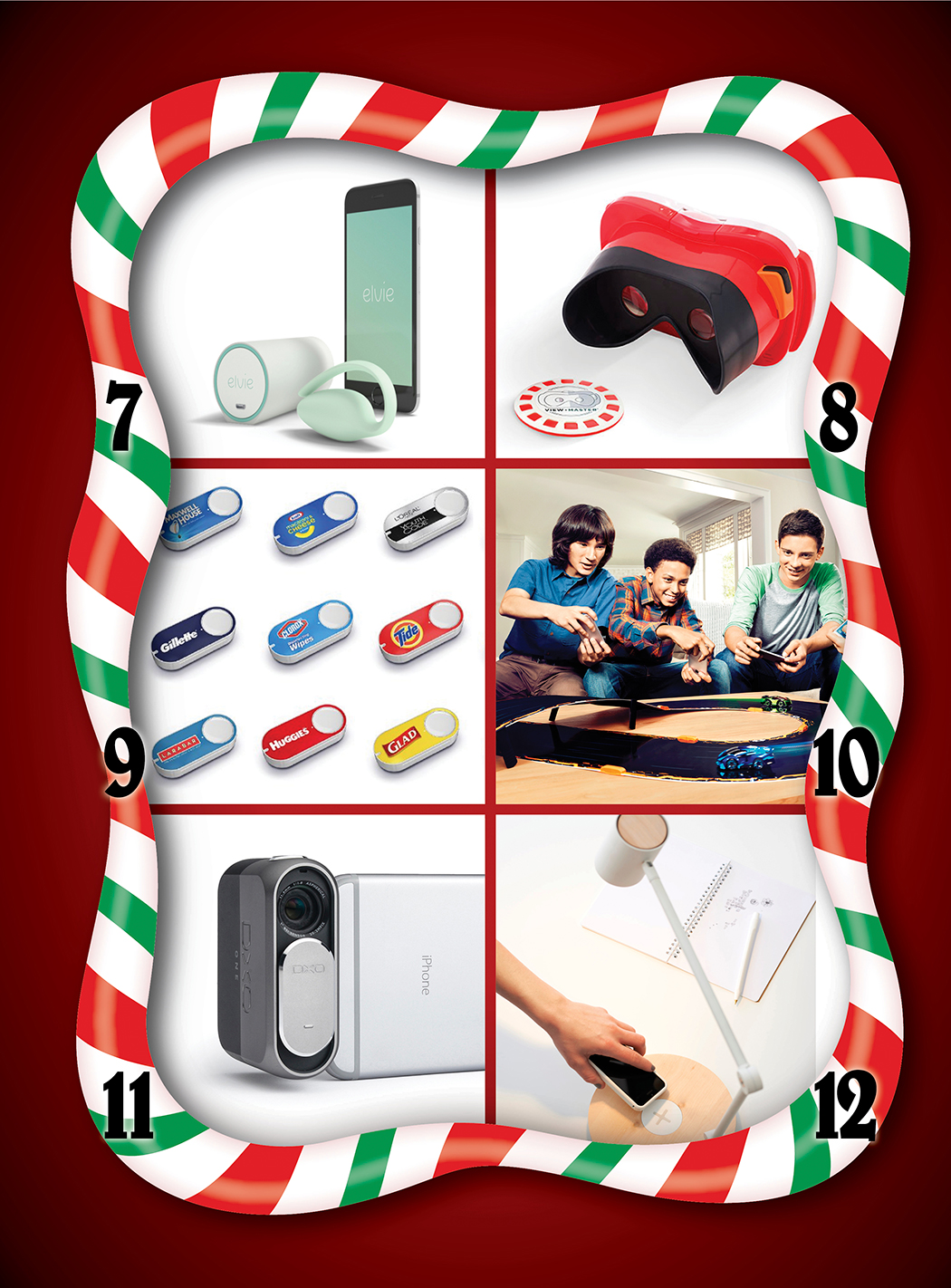